Special issue: Advances in seismic imaging across the scales 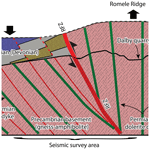 Abstract. There is a great interest and demand for green-type energy storage in Sweden for both short- and long-term (hours, days, weeks and seasons) periods. While there are a number of approaches proposed (e.g., compressed air, geothermal and thermal), only a few have commercially been demonstrated through upscaling projects. Among these, the thermal energy storage (TES) that stores energy (excess heat or cold) in fluids is particularly interesting. The excess energy can be stored underground in excavated caverns and used for large district heating and cooling purposes as well as for balancing and regulating electrical energy in power grids. For an upscaling underground TES project within the Tornquist suture zone of Scania in the southwest of Sweden, three high-resolution seismic profiles, each approximately 1 km long, were acquired. Geologically, the site sits within the southern margin of the Romeleåsen fault zone in the Sorgenfrei–Tornquist Zone (STZ), where dolerite dyke swarms of Carboniferous–Permian age are observed striking in the SE–NW direction for hundreds of kilometers both on land and in offshore seismic and magnetic data (from Scania to Midland Valley in the UK). These dykes, 10–50 m thick, in the nearby quarries (within both Precambrian gneiss and quartzite) express themselves mostly in a subvertical manner. They can therefore act as a good water/fluid barrier, which can be an important geological factor for any TES site. For the data acquisition, combined cabled and wireless recorders were used to provide continuity on both sides of a major road running in the middle of the study area. Bedrock depressions are clearly depicted in the tomograms, suggesting the possibility of zones of weaknesses, highly fractured and/or weathered, in the bedrock and confirmed in several places by follow-up boreholes. Several steeply dipping (60–65°) reflections were imaged down to 400 m depth and interpreted to originate from dolerite dykes. This interpretation is based on their orientations, strong amplitudes, regular occurrences and correlation with downhole logging data. In addition, groundwater flow measurements within the unconsolidated sediments and in bedrock suggest steeply dipping structures are the dominant factor in directing water mainly along a SE–NW trend, which is consistent with the strike of the dyke swarm within the STZ. To provide further insight on the origin of the reflections, even the historical crustal-scale offshore BABEL (Baltic and Bothnian Echoes from the Lithosphere) lines (A-AA-AB) were revisited. Clear multiphase faults and signs of intrusions or melt source in the lower crust are observed, as well as a Moho step across the Tornquist zone. Overall, we favor that the reflections are of dolerite origin and their dip component (i.e., not subvertical) may imply a Precambrian basement (and dykes) tilting, block rotation, towards the NE as a result of the Romeleåsen reverse faulting. In terms of thermal storage, these dykes then may be encountered during the excavation of the site and can complicate underground water flow should they be used as a fluid barrier in case of leakage.