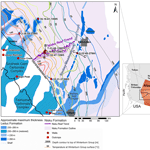 Abstract. The Canadian province of Alberta has one of the highest per capita CO2-equivalent emissions in Canada, predominantly due to the industrial burning of coal for the generation of electricity and mining operations in the oil sands deposits. Alberta's geothermal potential could reduce CO2 emissions by substituting at least some fossil fuels with geothermal energy.

The Upper Devonian carbonate aquifer systems within the Alberta Basin are promising target formations for geothermal energy. To assess their geothermal reservoir potential, detailed knowledge of the thermophysical and petrophysical rock properties is needed. An analogue study was conducted on two regionally extensive Devonian carbonate aquifers, the Southesk-Cairn Carbonate Complex and the Rimbey-Meadowbrook Reef Trend, to furnish a preliminary assessment of the potential for geothermal utilization. Samples taken from outcrops were used as analogues to equivalent formations in the reservoir and correlated with core samples of the reservoir. Analogue studies enable the determination and correlation of facies-related rock properties to identify sedimentary, diagenetic, and structural variations, allowing for more reliable reservoir property prediction.

Rock samples were taken from several outcrops of Upper Devonian carbonates in the Rocky Mountain Front Ranges and from four drill cores from the stratigraphically equivalent Leduc Formation and three drill cores of the slightly younger Nisku Formation in the subsurface of the Alberta Basin. The samples were analyzed for several thermophysical and petrophysical properties, i.e., thermal conductivity, thermal diffusivity, and heat capacity, as well as density, porosity, and permeability. Furthermore, open-file petrophysical core data retrieved from the AccuMap database were used for correlation.

The results from both carbonate complexes indicate good reservoir conditions regarding geothermal utilization with an average reservoir porosity of about 8 %, average reservoir permeability between 10−12 and 10−15 m2, and relatively high thermal conductivities ranging from 3 to 5 W m−1 K−1. The most promising target reservoirs for hydrothermal utilisation are the completely dolomitized reef sections. The measured rock properties of the Leduc Formation in the subsurface show no significant differences between the Rimbey-Meadowbrook Reef Trend and the Southesk-Cairn Carbonate Complex. Differences between the dolomitized reef sections of the examined Leduc and Nisku Formation are also minor to insignificant, whereas the deeper basinal facies of the Nisku Formation differs significantly.

In contrast, the outcrop analogue samples have lower porosity and permeability, likely caused by low-grade metamorphism and deformation during the Laramide orogeny that formed the Rocky Mountains. As such, the outcrop analogues are not valid proxies for the buried reservoirs in the Alberta Basin.

Taken together, all available data suggest that dolomitization enhanced the geothermal properties, but depositional patterns and other diagenetic events, e.g., fracturing, also played an important role.