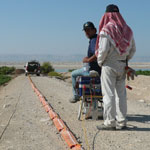 Abstract. Near-surface geophysical imaging of alluvial fan settings is a challenging task but crucial for understating geological processes in such settings. The alluvial fan of Ghor Al-Haditha at the southeast shore of the Dead Sea is strongly affected by localized subsidence and destructive sinkhole collapses, with a significantly increasing sinkhole formation rate since ca. 1983. A similar increase is observed also on the western shore of the Dead Sea, in correlation with an ongoing decline in the Dead Sea level. Since different structural models of the upper 50 m of the alluvial fan and varying hypothetical sinkhole processes have been suggested for the Ghor Al-Haditha area in the past, this study aimed to clarify the subsurface characteristics responsible for sinkhole development.

For this purpose, high-frequency shear wave reflection vibratory seismic surveys were carried out in the Ghor Al-Haditha area along several crossing and parallel profiles with a total length of 1.8 and 2.1 km in 2013 and 2014, respectively. The sedimentary architecture of the alluvial fan at Ghor Al-Haditha is resolved down to a depth of nearly 200 m at a high resolution and is calibrated with the stratigraphic profiles of two boreholes located inside the survey area.

The most surprising result of the survey is the absence of evidence of a thick (> 2–10 m) compacted salt layer formerly suggested to lie at ca. 35–40 m depth. Instead, seismic reflection amplitudes and velocities image with good continuity a complex interlocking of alluvial fan deposits and lacustrine sediments of the Dead Sea between 0 and 200 m depth. Furthermore, the underground section of areas affected by sinkholes is characterized by highly scattering wave fields and reduced seismic interval velocities. We propose that the Dead Sea mud layers, which comprise distributed inclusions or lenses of evaporitic chloride, sulfate, and carbonate minerals as well as clay silicates, become increasingly exposed to unsaturated water as the sea level declines and are consequently destabilized and mobilized by both dissolution and physical erosion in the subsurface. This new interpretation of the underlying cause of sinkhole development is supported by surface observations in nearby channel systems. Overall, this study shows that shear wave seismic reflection technique is a promising method for enhanced near-surface imaging in such challenging alluvial fan settings.